Fox Valley opened their spring 2017 campaign in the traditional fashion for Chicago Rugby Clubs, by competing in this classic season opener at the stunning venue that is Dan Ryan Woods. As always the Maoris came prepared to play hard, and have the best campsite of the tournament. Warmed by our raging fire, and fueled by Ryan Crawford’s Polish Sausages the Maoris opened with strong wins in our pool play against Lake County and The Riot’s Old Boys. Both in spite of Griffin McGuire’s knock-on’s caused by a refusal to remove his gloves, because it was cold. Unfortunately the polishes did not provide quite enough power to win a hotly contested battle against the Ducks in the first knock out round. The Maoris left their opening weekend with a solid 2-1 start to the spring.

The Maoris invaded Nashville determined to get their fill of[...]

The Maoris had a beautiful spring Saturday for their home[...] 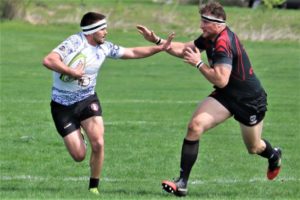